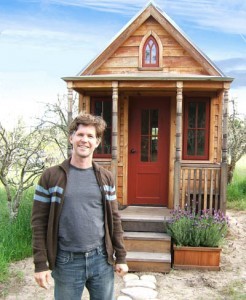 Jay Shafer, an inspirator and a pioneer for so many who follow the Tiny House Movement

It’s a small home, often on wheels, which can be build by yourself without any interference of a bank. That’s the summarized version. But there are other examples as well. On a foundation or on a boat. Built in a factory of by a tiny house builder too. A tiny house is not an officially recognized code. The term Tiny House has flown over from America. There’s, due to the increase of home sizes and their prices with a growing need for energy and the following economic crisis, a growing need for a different way of life. Simplified, smaller, less clutter, more self sufficiency and cheaper. For a part, I recognize myself in this story and that’s why I decided to use the term Tiny House as well, for this project.

The so called need for change of the way we live has resulted in a movement: the Tiny House Movement. At the moment it’s flourishing in the US and in Canada. It even caused a paradigm shift. People are moving into smaller average sized homes.

In my own country, the Netherlands, the situation is not as bad as in America. Our houses are already smaller and the economic crisis didn’t leave the same trail as it did in the US. But also here, things are starting to change. It’s not that easy anymore to get a loan with the bank. They want more assurance from for example your employer. Your income need to be very steady. On the other hand, employers are not as willing as a few years ago with providing steady contracts. So there is a growing gap between the two. And if you are able to get a loan, try to get the home! The market is killing right now and starters are having a rough time!
Together with a change of perspective on capitalism (more is better), on the dependency of energy and the need for a more stress-less, natural, and more conscious life, the Tiny House Movement has entered our country as well. Three years ago you wouldn’t find much on the net. That’s different today, luckily!

The video shown below is a documentary about the movement and it was my first encounter with Tiny Houses. I would love to share it with you. It’s a good overview of what it’s all about.

ENG: We use cookies on our website to give you the most relevant experience by remembering your preferences and repeat visits. By clicking “Accept”, you consent to the use of ALL the cookies.
Cookie settingsACCEPT
Manage consent

This website uses cookies to improve your experience while you navigate through the website. Out of these, the cookies that are categorized as necessary are stored on your browser as they are essential for the working of basic functionalities of the website. We also use third-party cookies that help us analyze and understand how you use this website. These cookies will be stored in your browser only with your consent. You also have the option to opt-out of these cookies. But opting out of some of these cookies may affect your browsing experience.
Necessary Always Enabled
Necessary cookies are absolutely essential for the website to function properly. This category only includes cookies that ensures basic functionalities and security features of the website. These cookies do not store any personal information.
Non-necessary
Any cookies that may not be particularly necessary for the website to function and is used specifically to collect user personal data via analytics, ads, other embedded contents are termed as non-necessary cookies. It is mandatory to procure user consent prior to running these cookies on your website.
SAVE & ACCEPT